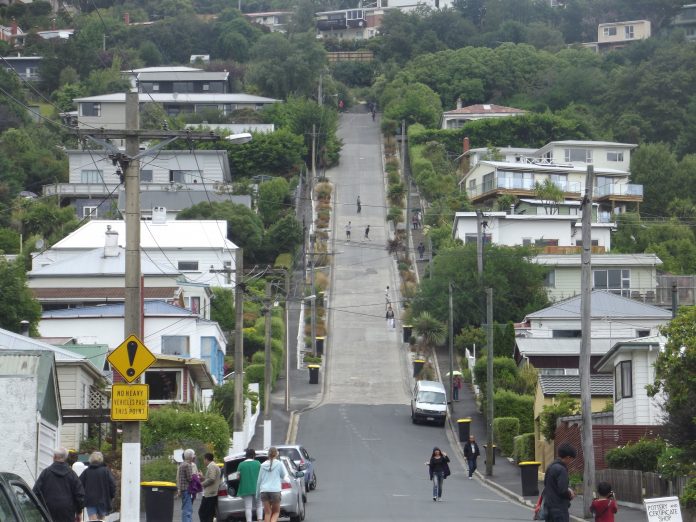 We only had two days and chose to focus on Cadbury World’s Tasting Tour, Speights’ Brewery Tour and a guided tour at the Royal Albatross Centre.

Yet, Dunedin has a lot more to offer than just these highlights.  It has a stunning setting. Enveloped by towering but extinct volcanoes, and spread out like a horse-shoe around its harbour, Dunedin is New Zealand’s and the Southern Hemisphere’s best preserved Victorian city.

Located at the bottom of Rattray Street, the brewery started during the Gold Rush in the late 1800’s. It’s now New Zealand’s largest brewery.  In the past gold nuggets attracted visitors to Dunedin; nowadays the only gold found is the liquid variety that flows from the taps!

Speights is the local beer – its slogan: ‘Pride of the South’. Quite simply, if you don’t drink Speights you’re not a true ‘southern man’! The brewery is currently undergoing an extensive upgrade, but won’t be moving from its current site as it sits on a water-bore hole.

Speights uses this mineral water for brewing its award-winning beers. Locals fill their water bottles for free (although the brewery does ask for a donation) from a tap on the street outside.

The tour is packed full of interesting facts and history about beer – including the origin of words like ‘boozer’ (Egyptian) and ‘to skull’ a beer (Anglo-Saxon). My 14 year old daughter, Cerys, enjoyed pulling her first pint as we sampled some amber liquid.

The road out to Taiaroa Head, on the tip of the Otago Peninsula, hugs a picturesque coastline, with views across the harbour. The centre itself huddles against the skyline on a wind-swept cliff-edge.

Albatrosses love it here, due to the cold southern winds – and it’s the only mainland colony of Royal Albatross in the world. We took a guided tour and saw plenty of the majestic seabirds soaring overhead. Their huge wingspans are, indeed, awe-inspiring.

During the tour, we learnt that common household rubbish and long-line fishing hooks kill way too many birds – a tragedy when you consider how rare and magnificent these birds are.

Visitors to the centre can also do tours of nearby Fort Taiaroa; the headland has fortifications and a lighthouse. The fort was built in the shadow of the threat of Russian invasion in the late 1880s and later used for training during the First and Second World Wars.

The Fort’s highlight is the fully-restored Armstrong Disappearing Gun – the only of its kind in the world.

The Cadbury Chocolate factory stands proud in flashes of its world famous purple colour on Cumberland Street, in Dunedin’s centre.

The factory produces most of New Zealand’s chocolate, and the heady aroma wafts through nearby streets enticing people of all ages to rush to the nearest corner store for a chocolate fix.

Most people get excited about chocolate – and we were no exception. The five of us – me, my wife, daughter and my wife’s parents from the UK – eagerly queued for tickets. Unfortunately, not everyone shared our enthusiasm.

Our tour guide had only arrived back from her summer holiday the day before and had a bad case of the grumps – perhaps he was suffering from a severe bout of chocolate withdrawals  He hurried us through the tour like we were a bunch of naughty kids.

Breathing in the sweet scent of hot chocolate, we frog-marched through the factory and caught glimpses of the production process as we went.

Disappointingly, the full tour was replaced with a much shortened version as the factory slowly returned to full production after the summer holiday shutdown.  The complimentary small ‘goody bag’ of choccies and samples of  creamy warm chocolate kept us occupied.

Whether visitors are looking for a city break with a difference, or a relaxing long weekend, the city’s strengths lie in its variety of things to see and do.

Our brief stay in Dunedin reminded me how much this city has to offer.  Although our time was limited we still managed to pack in a few extra sights, including Baldwin Street (the world’s steepest street, with a gradient of 1:2:86) and the serenity and quiet beauty of Dunedin’s Chinese Garden.

Learn about the history and production of chocolate and beer (and get to sample some) and watch mighty albatrosses glide overhead. All in a weekend’s work in Dunedin!

Singapore at Its Best – 3 Reasons to Visit