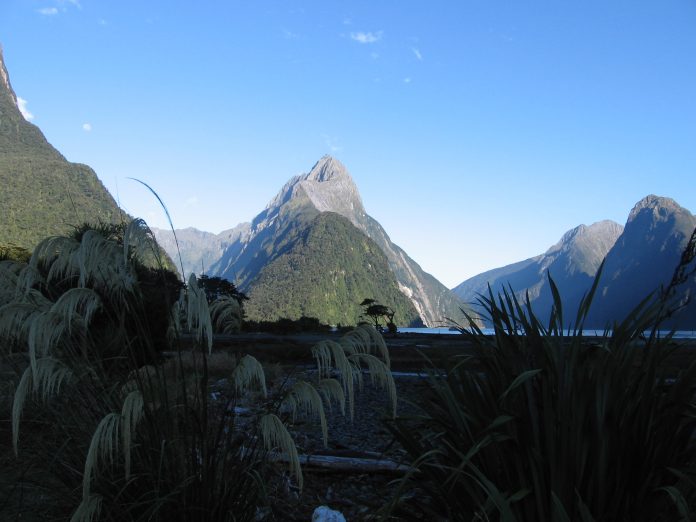 Air Milford has formed a significant presence in The Southern Hemisphere’s adventure capital as a premiere operator to Milford Sound.

I checked out why Air Milford’s intimate knowledge of the Queenstown area ensures that guests who fly with them leave with an unforgettable experience that Milford Sound is voted as one of the world’s ultimate “must see” destinations.

Quite simply, Milford Sound rewards those who linger.

It’s home to New Zealand’s highest waterfalls in one of the world’s wettest areas.

Milford Sound is an area of unrivalled beauty and extraordinary remoteness, where towering cliffs disappear into clouds.  It’s an area of bottomless depths, where what you observe above the water is mirrored below the surface.

It’s a place where scores of waterfalls gush uncontrollably from fractures in rock faces, projecting themselves like grey ribbons fanned by gentle breezes.

But first, you have to get there.

…and so the journey begins

“Hop into the co-pilot’s seat if you like” our Air Milford pilot, Matt, invites me with typical Kiwi friendliness, before giving a short safety briefing.

It’s Russ and Sarah last full day in New Zealand before they fly back to the UK.  Neville Smith and his wife, Sally, are also on their first ever sojourn to New Zealand and also hail from the UK – co-incidentally all 4 are from the same town – Tonbridge, Kent.

This should be a good omen.  Looking back, it was, because for the next four hours, the five of us came together for an experience of a lifetime.

A few years ago, I booked a similar fly-cruise-fly trip with my family for my 40th birthday.  The mountain ranges were snow-capped but foggy June weather conditions prevented us from landing at Milford Sound and enjoying the cruise.

Now I was back, alone, and ready to put the record straight that Milford Sound is one of the loveliest – and remotest – places on earth.

“Welcome to my office” Matt proudly boasts after receiving flight clearance over the plane’s crackly radio for our short hop to Milford.

The plane accelerates along the tarmac and I feel a sudden sense of exhilaration.

“We’ll shortly be flying over Arthur’s Point and Skippers Canyon” Matt advised, “and you’ll get the chance to see the Shotover River, which was one of the richest gold bearing rivers in the world.  We’ll have you landing in Milford Sound in about 35 minutes” Matt adds, pulling back the throttle on our single engine six-seater Cessna 206.

“Sit back and enjoy the views”.

“Milford Sound receives up to 180 days of rain each year, so today’s flying conditions are perfect” Matt announces.  The sun rose early on a beautiful January morning, blessed with clear blue skies with just a few specks of clouds.

Flying at 110 knots per hour, the plane climbs effortlessly to just under 2,500 metres and crosses the impressive and rocky Richardson & Humboldt Mountain Ranges.

Over the next 35 minutes our plane transforms into an aluminium eagle as we act out Gandalf, and soar wizard-like surveying the Lord of The Ring’s Middle Earth.

“Look to your left and you can see Lothlorien Forest, Isengard and Ithlien Camp” Matt says.  It’s not difficult to see why Peter Jackson chose such jaw-dropping mountain terrain as we retrace the steps of wizards, hobbits, elves, and orcs.

More hidden landscapes unfold below, revealing glacier lakes, waterfalls, dark valleys and cloud-piercing summits.  I dare not blink.  My head darts left to right as Matt describes the force of nature that created this geographical masterpiece.

There is a sense of awe as Milford Sound comes into view, and a small landing resembling a small black liquorice strip, amid a hue of green vegetation and blue water appears.

Mitre Peak has an immediate impact as Matt flies us out to the Tasman Sea to circle and descend gently.  The mountains rise like a steel wall on either side of the Sound, as we set foot on the tarmac.

“We call them the curse of the West Coast” Matt explains as sand-flies, the size of grape pips but with voracious appetites for human flesh, start to take an interest in us.

Matt observes that the Great Britain and New Zealand synchronised sand-fly swatting teams are no match for these tiny foes and suggests “Follow me.  They won’t bother us if we keep walking because they’re slow and can’t fly fast enough to keep up with us”

He was right and a short walk to the boat jetty to board the Milford Adventurer, a small boutique vessel with capacity for 150 passengers, was welcome respite.

It’s a four-hour drive, by road, from Queenstown, so tourists arriving by bus and cars crowd the late morning/early afternoon sailings on Milford Sound.  Boarding is quick, and a headcount confirms that only 14 of us will enjoy Milford Sound’s serenity on the 09:15 cruise.

Everyone scrambles to secure prime position on the boat’s sunny decks, but soon find out there is ample room for everyone to share in the awe-inspiring views.

Out on the Sound, it’s easy to see why the Sound’s nature and unsurpassed beauty has become a World Heritage site.

According to Maori legend, a demigod called Tu-te-raki-whanoa hacked out fiords with his adze (axe), starting on New Zealand’s South Island where he created jagged coast lines.

By the time Tu-te-raki-whanoa had arrived at Milford Sound, he’d perfected his skill and carved out the magnificent fiord, which Rudyard Kipling later called ‘The Eighth Wonder of the World”.

It’s also said that Tu-te-raki-whanoa’s goddess, Hinenuitepo was so impressed with the beauty of his carving that she created the sand-fly to prevent humans from lingering in the area for too long.

Tu-te-raki-whanoa’s masterpiece is best viewed from the boat’s upper deck.  It’s hard to mentally compute the size of anything in this 16 kilometre long amphitheatre of sheer granite cliffs, waterfalls, mountains.

Only the sound of the boat’s engines and thundering waterfalls break the silence of the morning.  At 160 metres, Bowen Falls leaps out from a hanging valley in the Darren Mountain Range to produce a sparkling white arc.

Sheer vertical granite cliffs dominate the skyline and plummet into the fiord’s icy clear waters, while the iconic Mitre Peak, at 1,692m, stands proudly upright like a gigantic sentry watching over this amazing fiord.

“It’s just so stunning, isn’t it?” asks a European,  with an accent I assume is Dutch but delivered in fluent confident English, as he wrestles with his binoculars and state-of-the-art digital camera.

It’s easy to respond and in a nanosecond I reply “certainly is”.  No matter how many photos one takes, nothing can replace the magnitude of being there.  There’s a feeling of being a minnow in this ocean of beauty, swimming amid this unrivalled amphitheatre of towering cliffs and cascading waterfalls.

Stirling falls, at 146m and more than twice the height of Niagara Falls, offers the perfect opportunity to get up close.  Spray from the thundering waterfall crashes on the foredeck forcing everyone to dash for cover.

Then there’s Mount Pembroke at 2,000m, sitting proudly as the tallest mountain to look over the fiord.

But there’s plenty of life surrounding it.

Fur seals and dolphins inhabit the deep waters.  Cruising slowly out to the Tasman Sea and back down the Sound’s southern arm, a couple of Common Dolphins emerge.

A camera clicking frenzy ensues as people whoop and holler as the playful dolphins romp by, swirling and twirling around the boat.  Seal Rock also provides an opportunity to photograph New Zealand fur seals.

“I’ve never seen seals basking in the sun before except in a zoo” proclaims a middle aged woman wearing the biggest pair of sunglasses I have ever seen.

Kayakers hug the shoreline on one of the fiord’s sheltered arms.  The number of tour operator boats operating is strictly limited and no shore landing is permitted.

As much as everyone wants to continue this spectacular journey, we would have to settle for permanently framing the experience in our minds, as the boat arrives back at the boat terminal.

“Who is ready to go back to Queenstown?” asks Matt, knowing the true answer.  The five of us conveniently pretend that we don’t hear him, instead trying to soak up a final look at Mitre Peak whilst on terra firma.  I’m sure that Matt would also stay all day if he could.

“Just one question” Neville enquires, as the engine gurgles to life.  “I missed a bit – can we do that again?” he continues with a playful smile and typical British humour.

The tiny airstrip recedes and the tarmac fades as we fly directly over the deep blue waters that only 30 minutes ago we were sailing on.  We pass Bowen Waterfalls again and track north, gliding over gigantic schist cliff faces towards the highest waterfall in the area.

Lake Quill pours a steady gush of water from its jug like lip to form the impressive Sutherland Falls – the highest in New Zealand.  Its first drop is an impressive 229 metres, the second is equally as impressive at 248m and the third drop is 103m.  When it’s full, these glaciers fed falls arch in one spectacular leap of 580m.

“It’s like a mirror” exclaims Sarah referring to Lake Adelaide as it sits in a bowl of steep mountains.

An Air Milford fly-cruise-fly flight to Milford Sound is just one of the many amazing experiences New Zealand has to offer.  But when a small plane flies over rugged landscape and lands on a short airstrip within metres of the fiord, that journey becomes a trip of a lifetime.

But all good things must come to an end. We touch down a little before midday and I say goodbye to my newfound friends.

It seemed a cliché when Air Milford promised to whisk us to and from Queenstown, offer a 90-minute cruise and do it all in just under four hours. But that’s exactly what happened, and it was much better than spending it on a sweltering, crowded coach trip.

There was so much to see and the memories still burn fresh in my mind.

Sarah and Russ tease me that they are jealous that I have so much beauty on my doorstep.

Getting there
Air Milford offers several flightseeing options, specialising in scenic flights to Milford Sound.  A fly-cruise-fly trip starts as little as $449 per adult ($339 per child).  Air Milford are based at Queenstown Airport.  For details go to https://www.airmilford.co.nz.