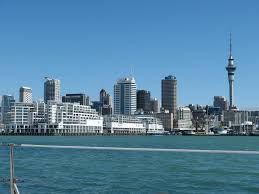 Auckland boasts more boats per capita than any other city on the planet. It has a proud sailing tradition and revels in its nickname “The City of Sails”. It’s the only city with two harbours, so water is never far away. Auckland is also a city of volcanoes – mostly dormant! Probably its best known is Rangitoto, which can be seen from most parts of the city.

Not far from the city’s central business district you’ll discover Ponsonby’s trendy boutique stores and cafes. Enjoy Mission Beach’s promenade and its beach front. Or catch a ferry, from Auckland’s exquisite Edwardian ferry terminal, to nearby Devonport for freshly caught Snapper and a chilled glass of wine. Head back to the city centre to Auckland Domain and choose from a visit Auckland War Memorial or watch the locals put willow to leather (cricket). Soak up the park’s laid-back lifestyle which Kiwis are well known for. Explore New Zealand’s indigenous Maori culture with a show in the museum or marvel in stories of Aotearoa’s proud history.

Auckland Zoo offers children the opportunity to get up close and personal with its inhabitants. Feed the camels on the African Savannah. If they still have enough energy, they’ll soon burn it off at Rainbow’s End Theme Park or Kelly Tarlton’s Aquarium. The Southern Hemisphere’s tallest man-made structure awaits the intrepid. Throw yourself off the top at break-neck speeds on a rubber-cord. If bungee jumping isn’t your thing, don’t worry. Watch the human ants scurry around on the streets below as you gaze at them through transparent floors! Stay for dinner and soak up a sunset in one of the Sky Tower’s restaurants featuring majestic 360 degree views.

Discover the Hidden Gems of Fiordland